God Can Use You by Bri Reitzner

It is the vision of Gloria Deo Academy to educate the whole student in order to graduate young men and women who will use their God-given strengths and talents to live lives of significance for the glory of God. The collaborative model at GDA recognizes parent involvement is crucial to the fulfillment of this vision. The Reitzner’s recent mission trip is an example of the vision of GDA at work in Tanzania. We hope Jack’s story encourages you and strengthens your faith.

My name is Bri Reitzner and I have 3 boys who attend GDA. I was asked to share about our family’s recent mission trip to Tanzania and my hope is that through this article you are encouraged by God’s goodness and His plans!

I have always had a heart for missions, a heart for Africa but honestly my greatest desire is to build up a heart for God and his people within my own children. For years I have prayed for the opportunity to take my children on an international mission trip with the goal of doing so when each turned 12. In 2020, I was invited on my first mission trip to Tanzania, what a dream!

In January 2021, Jack and I were blessed with the most amazing opportunity to be the hands and feet of Jesus in Tanzania. Jack and I returned to Tanzania in 2022 and let me tell you there is nothing more fulfilling as a momma than getting to see the Lord work in and through your children. Our God is a God who sees His people, every one of them, and he desires to bless them.

I wanted to share a few stories of how God used our team to bless His people halfway across the world. This is also a story of gratitude as so many of our local friends supported our trip financially and had it not been for their generosity, we could not have done the work the Lord had planned for us in Tanzania.

Jack joined the missionary team, played his guitar, and sang worship songs in several churches. He was blessed with new God ordained friendships during our 2-week trip in 2021. At the time I did not realize it but God was laying a foundation in 2021 that He would continue to build upon in 2022. When we returned this year, we got to see the fruits of what the Lord had started last year.

Last year Jack was able to raise funds to take along and use as the Holy Spirit directed. On January 31, 2021, we visited a church called Dar Es Salaam International Church. I remember thinking “God must have something BIG planned.” I had forgotten all about that thought we were sitting in the church, and I heard the pastor say it would be their last meeting as a church. He went on to explain that they had been meeting inside a building for the past 7 years but the rent was about to triple, and they simply could not afford to stay. He told his congregation they would be trying to raise funds to purchase their own building and then they would reconvene. As he spoke, Jack and I knew that the money we still had was meant for this church. We were able to give all the money we had left in 2021 to the Dar Es Salaam International Church that day. Brother Ray and his church used that money to buy their own building and start renovations.

Fast forward to the 2022 trip, when we were able to visit the Dar Es Salaam International Church in the building they had bought and renovated. The church has grown tremendously, and they have started several innovative programs. One of their recent programs is called “Saturdays with Papa.” On Saturdays they host a service for the homeless children living on the streets of Dar Es Salaam. The church rents a bus and drives through the downtown area picking up children from under the bridges where they live; these children come to the church where they are given breakfast, loved and taught the word of the Lord. 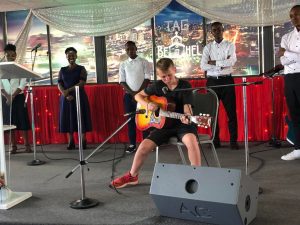 Jack was not supposed to go to Africa a second time so soon. I had planned to take my middle child, Ryan, in 2022 so that all my children could experience the joy of missions. Unfortunately, Ryan was still testing positive for covid-19 when our 2022 trip departure date arrived (We had all had covid-19 at the same time earlier in the month but only Ryan was still testing positive.) While I was heartbroken over that fact, I could not bear the thought of not taking at least one of my children given the fact they were all willing to go share the gospel. And thus, the day before our departure we bought Jack a ticket to return. Jack and I discussed that since he was returning sooner than expected he needed to pray about what the Lord wanted to do through him as clearly the Lord still had a work for him to do. It was through this conversation that Jack decided to step out of his comfort zone and into the Lord’s will; it was then that he decided he should share a sermon this year. He told the homeless children visiting Dar Es Salaam International Church that the Lord, our God, loves them and they are called to share the gospel. Jack told these precious children that all they needed to share the Gospel is a relationship with Jesus and a God appointed passion to serve him. Jack told them that all these things are available to every one of them. Jack and I then prayed over each child one by one. 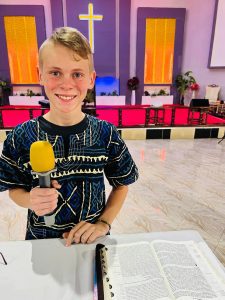 The children were captivated by Jack, and we were equally captivated by each of them. God is working both in and through Jack. God is building up his church in Tanzania and using a 13-year-old boy to help do so. Jack shared the same sermon at Central Light Assembly that he had previously shared with the homeless children at the Dar Es Salaam International Church, however this time it was mostly adults in the sanctuary.

Nonetheless his message remained the same, we (God’s followers) are ALL called to share the Gospel and we are all equipped, through the Holy Spirit, to do so. After Jack spoke at CLA, Pastor Bedon of Central Light Assembly shared that had been praying three days prior regarding the church’s mission for 2022 and he felt Jack’s sermon was a prophetic message for him and his church. Pastor Bedon collected a love offering for Jack, a love offering, can you believe that?

One woman in the audience did not have any money but she said she felt called to give so she went to her car and brought Jack a spice offering. It was a beautiful moment; a moment I know Jack will hold on for a long time. Sometimes our plans differ from the Lord’s plans. I was distraught that my middle child, Ryan, did not get to go to Tanzania this year as we had originally planned but I know Ryan’s time is coming and I recognize now that the work the Lord was doing in Jack through missions was not yet complete.

I do not understand why Ryan was unable to go this year but I do trust God and His timing. I plan to take both in 2023. If you are considering talking to your children on a mission trip, I would encourage you to do so. God wants to use them! Plan the trip, buy the tickets, take your kids! 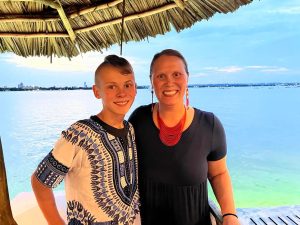