Mrs. Strain led Gloria Deo Academy students in an Opening Ceremonies devotional on Veterans Day. Mrs. Strain talked about how the widow gave all that she had when she gave her two coins, like many military personnel have given all for our freedom during Opening Ceremonies on Veterans Day. The following blog is an example of the devotionals GDA students do each week at school, usually led by Gloria Deo Academy teachers and staff.

“Did you know it is a holiday today? Is it Christmas, Easter, or 4th of July? It is Veterans Day. Veterans Day is a special day that is set aside to honor all the men and women who have served in the United States Military. Did you know military men and women sacrifice so much for us to be able enjoy the freedom and liberty we know today. We can go to church, come to a Christian school, and live as free people because of the American soldiers who have fought and continue to fight for our freedom.

As I was thinking about Veterans Day a Bible story came to my mind. Jesus was sitting in the temple with His disciples. They watched all kinds of people come in and give their tithes and offerings. Then an older widow woman came in. She only had 2 coins to her name. She put both coins into the offering box. She gave all she had. Jesus said to His disciples that she was a great woman because she hath given all that she had.

She reminds me of the American soldier because they give all for us. They sacrifice time with their families because they have to leave for months and weeks at a time. The Bible says, “[g]reater love hath no man than this, that man lay down his life for his friends” (John 15:13).  The American soldier knows that every time they go to work, they are putting their life on the line. They know they could be killed, yet they still give their all.

This reminds me of someone else who gave all. God gave Jesus, His only begotten Son. He let Jesus come down to earth to die on the cross for us, so we can be saved. God gave all and Jesus gave all so we can have a way to heaven. All we have to do is ask Jesus into our heart to be our Savior.

This red poppy is a symbol that many people wear in remembrance of our American Veterans. I have a small red poppy for each of you that I will give to your teachers. We can wear these today to honor our Veterans. I want to do one more thing before we dismiss today. Let’s all stand and say the Pledge of Allegiance again. This time as we say it, let’s not say it just because it is something we have to memorize, or because it is something we just do during Opening Ceremonies at school. This time, as we say the pledge, let’s think about the veterans who have given their all for us.”

I pledge Allegiance to the flag
of the United States of America
and to the Republic for which it stands,
one nation under God, indivisible,
with Liberty and Justice for all. 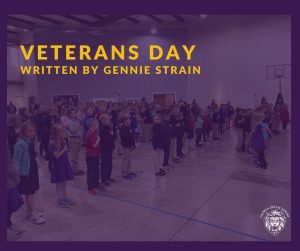