“I Love Cross Country, Just Not The Running Part.”

It is a grossly understated reality, especially in our postmodern world, that suffering has the unique ability to produce character and strength. Secular philosophies such as Stoicism preach an embrace of suffering as a means to manifesting virtue and achieving maximal resilience. The Holy Scriptures contain numerous stories of struggle, suffering, and woe in which the main characters (or nations) arrive on the other side as stronger peoples. The book of James is littered with references to the purifying and refining nature of suffering and hardship (James 1:2, 1:12). Granted, the book of James is referring to spiritual hardship and the refining quality that suffering has on the Christian in his or her walk with Christ. However, it is no great reach to assign those maxims to the human body and mind (which are integrally linked with the spiritual, but that is a separate discussion). Modern science and psychology back this idea up, this notion that hardship, suffering, and pain produce harder people, more resilient people. The skin calluses under frequent friction, the muscles expand and harden under repeated testing, and the mind’s sensitivity to fear is dulled under perpetual exposure to it. Science reinforces and validates these premises. For instance, pioneers in Cognitive Behavioral Therapy understood that human beings need to be incrementally exposed to that which triggers fear and suffering in order to overcome those obstacles. If you have ever spoken to somebody who has confronted and overcome the mental barriers of fear and hardship, you can see it in their eyes. Their soul radiates peace, their bodies carry strength and poise, and their eyes boast in it.

Science, experience, common sense, and even the Bible acknowledge the benefits of attacking fear and suffering and overcoming them. Exercise is a microcosm of that larger reality. Exercise is imposed suffering for the express purpose of callusing the mind and hardening the body. Running is one of the most potent microcosms of that painful dance towards liberation from fear.

When children are enrolled in schools, Gloria Deo Academy specifically, they encounter a numerous assortment of athletic activities available to them. One of which is Cross Country. Now, it may seem a little dramatic to read the above paragraph and hear me attempt to link such high and dusty philosophical dogmas to something as seemingly asinine and harmless as Cross Country, but remember, microcosms; the macro plays itself out in the micro. Running is structured, willful suffering for the express purpose of becoming better people.

When I accepted the role as Cross Country coach for GDA, I did not set out to create better runners. In fact, I told my athletes on day one that I did not care whether they won races or not. All I cared about was that they met hardship straight on and witnessed themselves triumph over themselves.

I never screamed at them (ask them, it’s true).

I simply told them the truth.

“The only competition is yourself.”

“If you can look me in the eye and tell me, truthfully, that you gave it your best, then I will be proud of you.”

“Running mirrors life! It hard, but it will make you stronger and better if you let it.”

Just ask one of my runners about the Pain Cave. They’ll tell you all about it.

As a coach, but more importantly as a leader, it was my responsibility to form these kids into stronger people. I wanted to play my part in making them into a people of integrity, character, strength, and resilience. Those lessons cannot be learned solely through academia or intellectual acrobatics. Rather, they must be fought for. They must be sweat for and bled for. The road to strength and nobility of personhood is a vertical mountain path laden with monsters and pitfalls. My role as their coach was to walk them through it in a microcosm. To give them the simulated sufferings of life and to equip them with the mental hardware to overcome it.

I wanted to create effective members of the Kingdom of God, which begins at the roots – it begins at the formation of the person. We do nothing for our community and nothing for the Kingdom of God if we fail to form our youth into resilient individuals who can face the terrors of life with courage, understand their place in the created order, and be grounded in faith in the transcendent Creator God.

To my athletes’ sole credit, they transformed. They came to me as timid saplings, each with fears and doubts about their ability. They feared running, they feared pain.

Yet, as the days rolled by and the miles tallied higher, I saw in them a fire for life and a thirst for more hardships to overcome. A jubilance came over them. They began to grow.

Now the season is over. The muddy shirts are being washed and the filthy socks are being tossed. Where once there was a sapling grove of fragile sprigs, now there stands a gathering of hardened, youthful trees. They have calluses, scars, and limps, but they smile and look you in the eye when they talk. They’ve seen pain and suffering. One of my boys, Owen Shafer, called running a “pain cocoon.” He said you come out the other end of suffering a different creature than before. He’s right.

So if you see some of my Cross Country kids in the halls of school, give them a wide birth. They’re not afraid of you.

“O to struggle against great odds, to meet enemies undaunted!

To be entirely alone with them, to find how much one can stand!

To mount the scaffold, to advance to the muzzles of guns with

For more information about GDA including sports contact us here! 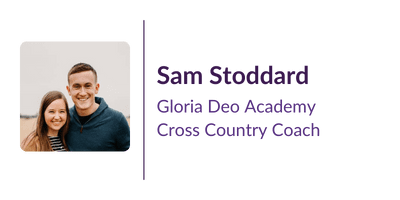